We Lived Near Beasley Streetby poemationIt’s a street in a suburb of a misunderstood townThe place where childhood’s journey beginsThe wind that blows around aboutSpeaks of loneliness and sinThe planned city hinged by round-aboutsTame and neat, a housewife’s treatIt’s Lumbertown, it’s Twin PeaksThe façade of Ainsworth Street

I currently reside in Millbury, Massachusetts, USA. I was born in England but have spent more than half my life outside the country working in various interesting places around the world.

I have been photographing items of interest since early childhood but my interest faded for a number of years until I discovered digital photography about five years ago. My work now consists of exploring the world of digital photography and digitizing and rediscovering my horde of 35mm and 2 1/4 square negatives.

My work has become more abstract over the years often with the original image, sometimes an old negative, being a springboard to extreme reprocessing using Serif’s PhotoPlus X5.

It’s Christmas Eve and I just wanted to say a big thank you to everyone who has been in and out of my life in 2014. Thank you for your support either through email, phone, letters, texts and coming to gigs. It’s been a year of exciting changes and new challenges for Stewart and I, as some of you may know.

Once again, we had another amazing winter tour, while Lady Ellie was still in my belly. Lots of great concerts, we met some interesting characters from here to Arnhem Land. On return from tour, Stew and I started recording my new album to be released next year. It will be nice to put those songs down and start of something new and as you know ‘Lady Ellie’ (dubbed by an old gypsy friend Romano) was brought into the world on the 1st of December.

Life has been a bit of whirlwind since then, but we managed to buy all the Christmas presents, (thank you ebay) squeeze a gig in with Ellie in a sling, record some more vocals, and pay extra special attention to Freddy, the dog, who is feeling a little put out. 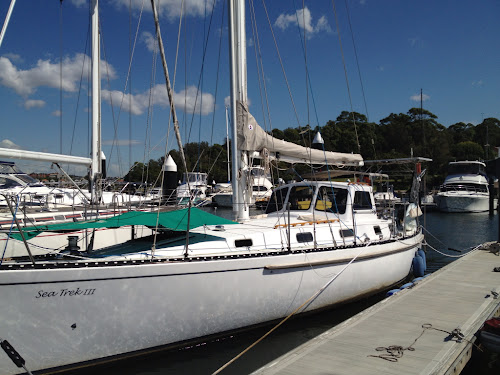 Jen and I are about to embark on another sailing journey on our new yacht Sea Trek III, a Savage 46 commonly known as an Oceanic 46. This this time we are heading north to the tropics, in other words a left turn out of Sydney Harbour, I’ll double check that with Jen, as last time we went north we ended up landing in Hobart, perhaps I installed the chart-plotter upside down!

Due to the strange nature of the theme I used for THE GEM COLLECTION I can’t quite see how to have such details as my profile, people’s comments or my replies appear. As a result, I am unable to post an acknowledgement of a Poet’s justifiable concern over my posting her sonnet ( in prose form) and without permission. so I shall do so here and in addition add some links to her work. The Sonnet which I used for December 11, 2010 – is a lovely piece called HIDDEN THINGS. When I am at my river’s edge here in Urunga, or thinking of the year or two I lived in Brisbane, the images in Hidden Things come to Mind.

My apologies again, Kathy.Very careless of me.

Kathy’s work can be read @

NEIL WHITFIELD, my first real blogging encounter, is re-locating to West Wollongong. I had not ever been there till early this year with Izzy  whose academic years were spent at UOW. NEIL’S SECOND DECADE.

Let’s take a look at this Winter. June, July and August. Hmm. This morning the mists were down and Bali the Brown Dog was out front early. All dogs were out and about during the night and Scoob the little dog is dirty and shamefaced.

Chooks are scrabbling and I am deep in changing blog themes and wishing I had left well enough alone.

I often wish that.

These are simply images and thoughts arising from the imagery.

ONE OF MY OBSESSIONS. HERE ARE A FEW OF THE SITES I LIKE. FREE FONTS THAT IS.

LUC DEVROYE IS NO KING FOR ME. LOOK HIM UP.

AS FOR THE REST:

REFLECTIONS ON THE LAST MONTH. THE FIRST MONTH HERE ON THE CLARENCE.  IN FACT – LETS MAKE IT REFLECTINS IN GENERAL.

Whilst acknowledging that its not the North to those further up the Australian map, for me this is the NORTH. Coming across JIM BELSHAW’s NEW ENGLAND Blog put a match to a few wee sticks of smouldering resentments which I have been allowing to burn softly. “Resentment” isn’t applicable to all of the issues. Some are simply observations. They are, however, wee sticks on a fire which flares now and then.

This week saw the passing of a former love of mine. The man I followed to the Tweed. He was in his mid 50s. Shedding some tears.

I am not actually writing about AUSTLIT. I am writing about 2 of the researchers involved in the Project.  Peter Knox and Dr Clay Djubal.

I am not actually writing about them either. Not in any Intellectual manner. I am inclined to honour them instead for their baking abilities.  Dr Djubal arrived at The Cottage on The Hill one fine day all the way from Brisbane and supposedly for a hard day’s work with Peter.  He was, in fact, bringing SCONES. With cream and jam. The lads did appear to deal with some degree of business activity but the highlight was MORNING TEA. Peter is a BAGEL baker but failed to produce any on this occasion. BRAINY, BEAUTIFUL and gifted BAKERS.

Originally founded in Armidale (NSW) as S.T.D. Music, Hire and Promotion (1983) by Clay Djubal, Have Gravity Will Threaten (HGWT) is an independent specialist publisher of music, plays, poetry and images from writers, musicians, composers, bands and photographers who emerged out of the New England region of New South Wales during the ‘pub rock’ era of the 1970s and 1980s. After being based in Sydney during the mid- late 1980s HGWT was re-established in Stafford Heights (Brisbane) in 1993.

AND NOW FOR THE SILVERBIRD8

A DAY WITH NEW FRIENDS AND FAMILY

SUNDAY NIGHT AND THE DEATH CAFE

“I was smiling yesterday,I am smiling today and I will smile tomorrow.Simply because life is too short to cry for anything.” ― Santosh Kalwar, Quote Me Everyday

TIME FOR THE SILVERBIRD 4

LOOKS LIKE WE HAVE RUN OUT OF ROOM . FAREWELL FROM SILVERBIRD 5.

A SCAN IN COFFS HARBOUR

“The rain began again. It fell heavily, easily, with no meaning or intention but the fulfilment of its own nature, which was to fall and fall. ” HELEN, GARNER – | THE OLD PROVERBIAL RECOVERY

DUCKS AND OTHER BUSINESS

I GUESS I STILL HAVE SOMETHING TO OFFER.

TIME FOR THE SILVERBIRD 4

National unions take to the streets to ‘change the rules’

Your Silence On Manus And Nauru Is Your Complicity – New Matilda

IF IT BE YOUR WILL

4 Years Worth of Gambling Addiction Advocating and Sharing My Story Here on WordPress To Help Many From This Cunning Real Addiction!

4 Years Worth of Gambling Addiction Advocating and Sharing My Story Here on WordPress To Help Many From This Cunning Real Addiction!

BREAKING THE CYCLES With Lisa Frederiksen. An Important Resource and a Must Visit Recovery Website…

Reflections of Recovery as I Celebrate My 13th Year and After Rising From The Ashes of Addiction and Sharing a New Friends Story . . .

Recent Posts: TALES FROM THE TRIFLORA

I forgot to tell you that we have another new member. Her name is HEIDI and she is very interesting. I will tell you more about her soon.

ANOTHER DAY IN THE FAIRY GARDEN

Well, Nana was sleepy and tired today and she didn’t wake up very much so Mumma Mandi and Amethyst went to the Spring Plant Fair in town and came home with good dirt and beautiful plants for the garden. They put mats down to sit on and hung bells and coloured cloth from the trees. […]

WELCOME TO THE FAIRY GARDEN

Things have been very difficult for everyone in Triflora and we have been very very quiet. Now we think that everything is peaceful and happy again -so we will tell you more about what is happening. Clara and Amethyst are building a new doorway into Triflora. They are building a fairy garden at the bottom […]

from the ELDERWOMAN in the WORKERS' COTTAGE. THIS WAY HOME .

WHEN THE NIGHT COMES

TIME FOR the SILVERBIRD 3

POEM BY THE 2 YEAR OLD

“As I stood on the lonely backroad, I’m sure I heard birds, kookaburras, laughing …” ― Steven Herrick

There were happy days, with watermelon, and sad days of whiskey.”

Nanny Ogg appreciated fine wine in her very own way. It would never have occurred to Casanunda that anyone would top up white wine with port merely because she’d reached the end of the bottle.

From Walter Crowley’s "Rites of Passage" There is another legacy of the Sixties which is often neglected: tens of thousands of individuals who won the revolution at least in their own lives. They live within the system but they are not part of it. They organize their work and existences by their own rules, and have achieved a personal independence of thought, action and moral choice which does not require social sanction. They are free men and women and their examples might be the most subversive influences extant today.

Learning to stumble through life without the comfort of booze.

A sweary alcohol recovery blog written by a Yorkshireman

Process Not An Event

A woman's quest for one year of sobriety

A mom, wife and professional's journey on recovering from addiction

I used to drink and now I don't

LIGHT ON THE THRESHOLD

My life and other sordid tales

Rowing from Home to Home